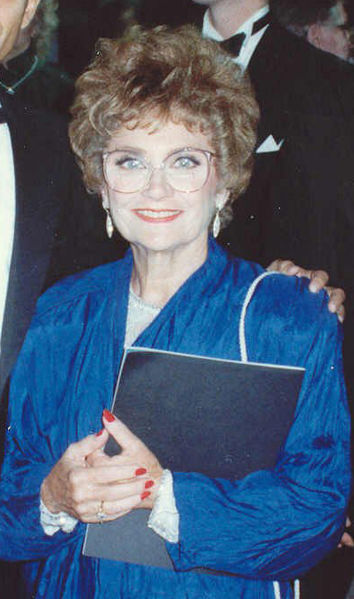 by Kira Albin, interview conducted in 1995

She’s bawdy, sassy, meddlesome, endearing and deadpan funny. She’s been a mother to just about every actor in Hollywood: Cher (Mask, 1985), Barry Manilow (Copacabana, 1985), and Sylvester Stallone (Stop, or My Mom Will Shoot ). She was Mrs. Beckoff, the mother of Arnold Beckoff, in Broadway’s Tony Award-winning Torch Song Trilogy. This perpetual mom writes in her autobiography, If I Knew Then What I Know Now…So What? (Contemporary Books, 1988), “I’ve played mothers to heroes and mothers to zeroes. I’ve played Irish mothers, Jewish mothers, Italian mothers, Southern mothers, mothers in plays by Neil Simon and Arthur Miller and Tennessee Williams. I’ve played mother to everyone but Attila the Hun.”
She’s Estelle Getty, also known and adored by many as Sophia Petrillo, the feisty, sharp-tongued octogenarian mother from television’s Golden Girls, Golden Palace and Empty Nest. The vast quantity of fan mail that Getty receives is tribute to her widespread appeal. Surprisingly, kids are some of her biggest admirers. “I think they look upon me as an old child, because I’m so little,” says Getty. “But they love the fact that I talk back to Dorothy” (portrayed by Bea Arthur).

Under five feet tall, Getty is a giant in the heart department. She stays involved in many causes, particularly AIDs, and is a spokesperson for Alternative Living for the Aging, a nonprofit organization that locates cooperative housing for seniors.
She identifies with the underdogs in life, having experienced discrimination against her height, and now to some extent, her age. “Being tiny has been difficult for me in a business that regarded physicality as the most important part of your life,” says Getty. “And I always had to fight against the fact that I could do things even though I was small. And eventually I proved to them I could play mother to six footers.”

Hollywood’s stereotyping of older people is beginning to change, Getty claims, and she credits Golden Girls for some of that. “Before [Golden Girls ], every single older person was a mother or a grandmother. Now there are neighbors, secretaries and people who have jobs who are older people. You see roles they’ve never been allowed in before.”

By choice, Getty is currently retired despite her disavowal of such a concept in her autobiography. “I lied,” she chuckles, in response to the question of her discrepancy. “This is the first time in 14 years that I have been off from work. So it’s kind of nice. But I’ve only been off for about four or five months. I don’t know if I’ll be this brave later on.”

Getty’s accomplishments over the last five to ten years have left her feeling satisfied, at least for the moment. Torch Song Trilogy was a daring and successful production. “It changed the face of the American theater,” says Getty. “I thought I had reached my point of highest success when I did that play.” Then six weeks after arriving in Hollywood, Getty was cast in Golden Girls, a series which she believes “changed the face of television.” “I don’t have very much more to prove, and I’d like to stop while I’m still ahead, before people tell me I should stop.”

Getty is a harsh self-critic. She’s not particularly proud of her autobiography, calling it, “a thin, little book” and reveals that she hasn’t seen most of her shows because she doesn’t like watching herself. And while she enjoys the attention and fan mail that are part of her celebrity status, she has not accepted that people are awestruck by her.

Illustrative of her attitude is the story she tells of sitting in a restaurant with her son while a woman with blue-green hair stares at her in-tensely. Baffled by the attention of this woman, her son gently reminds her that she’s being stared at because she’s Estelle Getty. “It never occurred to me,” remarks Getty. “I never think of myself that way, and just as well. I still have the same friends, same outlook. Nothing has changed for me.”

On a material level, there are changes: a new house (purchased only two months ago) with a huge garden, pool, gazebo, two bars, four bedrooms and four bathrooms. Getty, having never owned a house before, is still stunned when she wakes up every morning.

But a nouveau riche of Hollywood she is not, having lived through the Depression and knowing what it is to need money for food. To the chagrin of her managers and agents, Getty dared to park her used, orange Toyota Tercel on the Golden Girls studio lot long after the show became a “megahit.” As she revealed in her autobiography, not everyone was amused. “People started coming up to me in the hall: ‘Estelle, I’m sorry to tell you this, but someone took your parking space. There’s a Toyota in your spot.’ ‘No,’ I’d say. ‘No one took my spot. That’s my car.’

“They would grin, certain that I was joking. When they realized I wasn’t, they were aghast.”

It wasn’t until Getty’s business manager informed her that her Toyota could no longer be deducted, having fully depreciated, that she finally consented to purchasing a new car.

The trappings of success are incidental; it is the work that compels and drives Getty. During taping season, the cast produced a show a week. “It’s hard work and we were very conscientious of the quality of the show, of making it the best.” The show thrived from good script writing and the synergy of the cast: Estelle Getty, Beatrice Arthur, Betty White and Rue McClanahan. “We sure were simpatico,” she recalls. “We’d laugh at the same jokes, we had the same feelings about animals and about the world. It was quite remarkable.” On one occasion the four refused to do a show that depicted them raising minks for furs. Getty says they were in unison about their likes and dislikes.

Of the four actresses, Getty was the only one who was new to the genre of television, having spent all of her career on the stage. But despite 40 years of experience, Getty still had stage fright. She recounts the experience, “Every Friday night, when it was over I would say, ‘that wasn’t so bad’ and then the next Friday would come along and I’d be struck with terror. I fight everything.”

Getty’s an unconventional person, few would disagree with that. At the age of four, when her parents took her to see a vaudeville show at the New York Academy of Music, Getty’s life changed dramatically. “I became an actress in my heart and soul,” she writes. “And that’s how it’s been for my entire life.” At a time when nice girls didn’t stay out at night or mix with strangers, Getty was doing just that to pursue her theatrical career. Her long-suffering parents had no idea why she was so difficult.

Getty also has a very unorthodox marriage. Her husband of 48 years, Arthur Gettleman (Getty’s stage name is a derivative of his surname), currently lives in Florida, while Getty resides full-time in Hollywood. They see each other every few months or less, an arrangement that works for both of them. Except for when their two sons were young, Getty was constantly on tour. “Arthur was always very supportive of my career. We just have very different lives.

“He likes a quiet, unblustering life, whereas I’m the party person.”
Unusual also is ‘golden girl’ Sophia Petrillo (Getty’s character) an 80-year-old Italian mother with a saucy mouth, ribald humor and trademark purse from which she is never separated.

Getty writes about a scene during a Golden Girls episode when Sophia is angrily cleaning out her purse and is asked by one of the other women what she’s doing. “‘I’m cleaning out my purse,’ Sophia says with an edge.

“‘Sophia, why are you so angry?’
“‘To tell you the truth, I haven’t had sex in 15 years, and it’s starting to get on my nerves!'”
People ask if Sophia is a role model. The question makes Getty “uneasy.” “Sophia’s not a real person. She’s a character on a TV show. So was Mister Ed,” writes Getty in her autobiography. “At the same time, though, I can see how senior citizens can look at her and feel good. I like the fact that she has opinions, she’s feisty, she makes her wants and needs known. If watching Sophia reminds people that they can still be vital, vociferous, and vigorous, then I’m all for it.”

While Getty is aware that Sophia is fictional, many of her fans appear ignorant of this fact, approaching her on the street and talking in Italian, asking her questions about her late husband and inquiring about the three other women she lives with. Most humorous are those admirers who approach and say in nervous confusion, “You’re my biggest fan.”

“People assume that I’m wiser than I am because I’m somewhat successful,” Getty explains. Her response: “Age does not bring you wisdom, age brings you wrinkles. If you’re dumb when you’re young, you’re going to be dumb when you’re old.”

But Getty does have wisdom to impart to others. “Older people are important, they’re viable, they can live the life they choose and not be grunged under. It makes me happy to see that older people are having a greater impact on society.”
Sound advice from America’s boldest mother: “Don’t allow people to say, ‘You’re old, you can’t do this.’ You can do anything you want to do.”